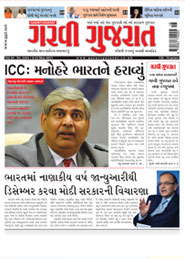 Garavi Gujarat is the biggest-selling Gujarati newsweekly outside India. The paper has an unrivalled and rich history of chronicling the journey of the Asian community in Britain over five decades.

Garavi Gujarat’s award-winning team of journalists bring together a weekly digest of the world’s most important events, covering news in India, the UK and across the global diaspora. The paper is renowned for its fearless journalism, thought-provoking features and columnists.

A family-centred publication, it reports extensively on business, sport, Bollywood, fashion and health, as well as spiritual affairs and cultural events close to the Gujarati community. Its weekly subhashit, a column interpreting and relating classic Indian poetry to everyday life, has become one of the paper’s signature features.

The paper was launched on 1st April 1968 by its founder-editor Ramniklal Solanki and his wife, Parvatiben, as a handwritten cyclo-styled newspaper from a small terraced house in Wembley, north London. It was one of the first ethnic titles in Britain, published only a few weeks before Enoch Powell’s infamous “Rivers of Blood” speech. Garavi Gujarat also has the unique distinction of carrying face-to-face interviews with every British Prime Minister since Harold Wilson’s first administration.

In 1992, Garavi Gujarat launched into America with a dedicated US edition. The paper has established a strong and loyal following with readers in every US state and is widely read by both professionals and business owners who dominate the motel and retail sectors in the US.

Garavi Gujarat is read across the world with readers in Europe, Africa, Australia and North America. Such is the paper’s reach around the world that it is said that the sun never sets of its readership.

Its sister brand, GG2, was established in 1998 with the launch of the GG2 Leadership Awards, celebrating the outstanding achievements of Britain’s ethnic minority communities. The GG2 Power List, profiling Britain’s 101 most influential Asians is launched at the event each year. The GG2 Diversity Conference was launched in 2017 to bring together Britain’s pioneering thought leaders and diversity practitioners to share insights around diversity and inclusion in the workplace and beyond.

Garavi Gujarat is online at www.gujarat.co.uk. For more on GG2, visit www.gg2.net/events.